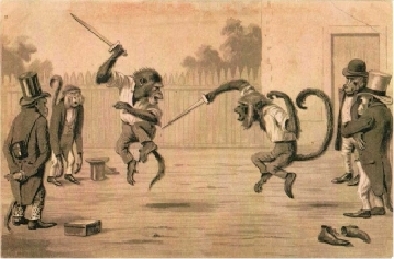 Since I know many/most of you don’t read the comments – I thought I’d take a minute to summarize a couple of points (and Tim’s latest e-mail, which I think deserves a full response as it echoes a lot of things I’ve seen both in e-mails, and on other sites about this issue.

This is not a partisan politics issue. C-61 is better than C-60 (which was the Martin governmentâ€™s stab at the same thing) â€“ but â€œless crummyâ€ is not really what I strive for in public policy.

Russell pointed out that C-60 used the World Intellectual Property Organization definition when determining infringement while C-61 uses the far more restrictive National Information Infrastructure definition (used exclusively in the DMCA in the US).

To be fair, I wasn’t really thinking about this aspect, rather of a number of copyright areas that C-60 muddied considerably (photograph ownership, libraries, and educational on-line use being the three I recall) while adding no real teeth to prosecuting infraction (which was eventually done through the criminal code).

My nominal (at best) preference for the latter would be a case of it at least not introducing new grey areas into the law.

2. Now to Tim’s comments (I’m going to focus on his second post, which covers much of the ground of his first):

While I appreciate the fact that you, like many, would seek to deny your status as apologists, you both continue to apologise!

This comes up (especially in vitriolic e-mail) a lot – so just to clarify, I don’t think “apologist” means what many people think it does. I neither apologize for infringement, nor do I “defend the faith, cause, or institution” of infringement.

Just because someone has a differing opinion from me as to what they feel should constitute “fair use”, or how to differently allocate limited resources, I don’t presume that to mean that they think the entire concept of copyright enforcement is without merit.

And while I do understand that both software and the hollywood film industry are unique and separate instances worthy of particular and significant consideration, they are no more worthy of copyright defence than (music and art)…

I don’t think that was ever suggested. I did suggest that the music industry has different issues than many sectors, since casual infringement is more common. The “Hollywood” film industry has enough money and lawyers to look after it’s own interests, so lets keep the focus domestic.

Where you are correct is that legislation has got to work for everyone equally. Recognizing that, it’s only natural that different areas of the legislation are going to be of different importance to each sector. (Say, programmers being more concerned with DRM-locked platforms, or musicians being more interested in publishing rights than sculptors).

However all the points I raised are equally applicable to all sectors, including music. The DRM provisions in the act could equally affect music distributon. If iTunes decides to disallow non-Fairplay material on any iPod or iTunes – do you want the only way to service that audience to be to sell your rights to Apple? What if Philips decided to change the redbook audio specification so that only CD’s that had been “signed” by them were legal – and all musicians had to pay a $5 per CD fee for this service, plus a percentage of sales? Do we want that as a society? I’m not saying either is likely, but with digital distribution up in the air, creators first interest should be protecting creators rights – on both the consumer AND the distribution front. Making a token effort to fix problems on one front doesn’t help, if it’s introducing huge areas where creators can be exploited in the other.

By the same token, I would think all sectors should like to see the government truly give some teeth to law enforcement to prosecute those profiting from infringement, or once-and-for-all figuring out what constitutes fair use in this country and what images, tunes, lyrics, concepts, or excerpts will get us sued if we use them in new creations? Who wouldn’t like to see forward thinking laws that encourage artistic growth, freedom, and expression – while making sure that individuals can profit from their works?

None of these issues particularly prioritize one sector over another.

It is my opinion that the new law, inspite of itsâ€™ many shortcomings and our many differences, will acheive the most good for the greatest number, and put an end to the ammoral thievery and despicable lack of ethics that Canadians have become know for around the world since the rise of the internet.

This is just silly. At most this bill brings Canadian laws closer to the DMCA – an act who’s own author admits is a failure, has been badly abused, and that has done nothing to curb infringement. And while I’m no stranger to hyperbole (see #1 above) Canada rarely ranks in the top 100 countries by copyright infringement per capita (excepting some vitriolic RIAA/IFPA reports on music only – reports I find somewhat suspect given that both organizations have such a vested interest in trying to influence Canadian law (especially if it starts to gain traction as a possible example of a need for change in the DMCA).

[…] Similarly, your â€˜opinionsâ€™ regarding the music business are exactly that, and as you provide no background of experience nor any data to corroborate your statements regarding that industry and/or that area of the copyright environment, they ought to be relegated to that status, not trotted out in defence of an already tenuous argument.

I’m not 100% sure which points Tim is disagreeing with, so let’s just tackle the underlying thesis: That music piracy has little, if anything, to do with the long-term revenue decrease in the Canadian music industry. Thankfully this is a very easy one to support. Both Heritage Canada, and Industry Canada sponsored recent, government-controlled studies to measure the actual impact of illegal music sharing on industry revenue. The 2007 Industry Canada Study concluded that there is no positive or negative correlation to music infringement and music sales (and in fact those who have infringed music rights buy more legal CD’s than those who don’t), and the Heritage Canada study found similar results for digital music as well. There’s a good summary of both at MichaelGeist.com if you don’t want to read both studies.

Once again, democracy appears set to protect us from ourselves, and I for one am relieved that the good of the silent many will once again manage to outweight the good of the vociferous few with the passage into law of this highly controversial bill. Have I mentioned how much I love democracy? What a sweet and wonderful concept it truly is!
Enjoy!

Disregarding the fact I’m still not clear if C-61 has any chance of passing before another election docket-reset, I sincerely hope you don’t truly want to see a pure democratic outcome to this debate – because I suspect knowing copyright infringers outnumber content creators by a significant margin and if they decided to become a political entity, we would all be well and truly boned.

[Edit 07/14/08 – Minor clean-up for some truly awful spelling and grammar. No more early-morning posting when I can’t sleep]