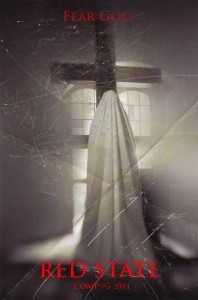 It was at this point that the film bloggosphere exploded with rage, for reasons that aren’t entirely clear to me. Writers were alternately angry that Smith lied to them about his intentions, or that he was using them for promotion of his new distribution company, or that he plans to charge $60 to $70 for tickets to these advance screenings when critics are used to getting promotional screenings for free… or… something. They were certainly angry. The one thing that surprises me is that more prominent film-bloggers didn’t grow up watching professional wrestling – since the “vaguely worded *big reveal* let-down” is pretty much the oldest game in town. I don’t really have anything to say about any of that. I wasn’t even aware of the film until e-mail started trickling in today on the topic.

What I do care about is that some writer’s take-away from this seems to be gushy badly-researched prose that Smith has discovered some revolutionary new distribution style that all of film-dom should be tapping into. [Edit – One day later a lot of the most egregious examples have vanished, or been re-written, but I’m sure others are still out there – drop some links in the comments if you’ve got some good examples] As Smith himself pointed out on Twitter, this is actually a really old distribution style – the “throw a print in the trunk and drive from theatre to theatre” model. He specifically mentioned the Weinsteins as inspirational of this venture, but huge numbers of 70s and 80s filmmakers did the exact same thing (the two exact parallels that come to mind with Smith’s plan would be Warren Miller and Uwe Boll – Miller had the grand “evening with the filmmaker” event, Boll had (believe it or not) a supremely dedicated genre fan following).

Why this isn’t a model that’s transportable outside of this specific case is the same reason that four-walling died out almost exactly at the same time as the adoption of home video: With increasingly pervasive media It starts to get exponentially more difficult to do small releases in singular geographic centers without major marketing funds. When Warren Miller used to bring a new extreme skiing film to town in the 80s it had an immediate built-in hook – “If you want to watch an extreme sports movie this year – here is pretty much your only chance!” Ditto why so many 80s horror and sci-fi films attracted cult followings: there was only a limited number of them each year and you had very few chances to catch them. As home video increased it became harder and harder to attract attention in one-off screenings and marketing and promotion became more and more key components to get an audience to come out and see a film – if there’s more *stuff* constantly, it’s harder to stand out. Plus you’re now even just focusing on “people who are going to watch a movie tonight” you’re now competing against multiplexes, studios, television specialty channels, console streaming, and the like at every stage (competing for audience, for press, for any kind of mind-share really).

This is exactly the same problem that Canadian distributors face daily – the cost of marketing a film *IN CANADA* doesn’t really scale with the returns from an audience the size of the population OF CANADA. One of the key problems is the “spillover” from marketing efforts in the US are so much greater than any Canadian distributor could ever independently compete with. Which explains, in about half a paragraph, why there is (if you live in a major metropolitan city in Canada) likely exactly one Canadian film playing this week at your local multiplex. Usually it would be none, but then Paul Giamatti had to go win a Golden Globe for “Barney’s Version”, and ruin my parable.

Back to Kevin Smith – obviously he is a known quantity independent of his films (with a hugely engaged fan-following), so he can invert the traditional model – charging a huge premium to his most devoted fans for the privilege of seeing the film first, and then try to use that as leverage into a more traditional general opening much later. In this case the marketing and promotion you need for a limited release is just Smith’s magic inherent promotional ability – which is unique to him as he was such a key, charismatic, figure at the inception of the “film blogger age”.

Now having said all that, I don’t believe the business plan Smith set out with was “overcharge my most passionate fans for as long as I can, because they’ll pay it”. I absolutely have no problem understanding where Smith is claiming to come from. There is nothing more infuriating than pinching every single penny to try and make a film as economically as possible only to see any potential of a return get swallowed up in gargantuan “marketing expenses” that will never recoup. It’s the same math that horrifies people when I point out how if you make a $10M film, that grosses $30M at the box office it has still likely not come close to making a profit. But any alternative model really only works if you have a known property with built in marketing and promotion. And let’s not kid ourselves on the economics – they’re still tough. If (as suggested) “Red State” had a paltry (for a Kevin Smith film) $4M price tag, you’d have to sell out all 6,000 seats of Radio City Music Hall (at a steep $60 a ticket) for twelve consecutive nights to earn that kind of revenue (and you still probably wouldn’t have broken even at that point, what with the cost of renting out the theatre and staff and, travel and accommodation and whatnot). But if you can do that, without putting up so much as a single poster, you’d be in the ballpark of actually making money on exhibition (and let’s be clear here, making money on theatrical exhibition of any is beyond rare).

But that’s with a beloved filmmaker, with the most passionately mobilized fans that exist on the internet, and a $4M budget. This model doesn’t work with an average (or unknown) director or property. $60 for a sneak peak film of your favourite director (presumably with him in attendance) is not the same as, say, paying $60 for a screening of “Vulgar” (the 2000 film Smith exec produced for his buddy Bryan Johnson). Even if you could get fans to pony up $10 based entirely on your “brand recognition” – you’d now need to sell more than 400,000 seats for that same $4M film to be profitable (and remember the more screenings you need the less profitable four-walling becomes – not to mention the increased risk of losing money if you don’t recoup your theater rental fees in admissions). And once we get into having to reach hundreds of thousands of people, you really start needing significant advertising and promotion. And once you get into any kind of advertising buys “one film, one night, one location” becomes grossly inefficient (if not impossible). Just as napkin math – one full page ad in an alternative “arts” weekly (circulation of 50-100k or so) is likely going to run you $1-2k which is pretty much the entire gross for a screening. Without a wider release you’re throwing money away (albeit on a much smaller scale).

Finally all of this avoids the whole other part of the “profitable exhibition” discussion which is that theatrical exhibition is really, when you come down to it, just a fancy form of marketing and promotion itself, as all the other revenue streams for film (home video, television licensing and the like) are the avenues that are most profitable – but depend to some extent on theatrical (this odd relationship being one of the main reasons DVD’s cost what they do. But Smith seems to be very clearly talking about finding a way to make theatrical exhibition work better (at least from what I’ve heard) so let’s not muddy the issue at the moment.

I guess what it comes down to, is that I’ll be interested where this all leads. I absolutely think Smith has the tens of thousands of fans willing to shell out the $60-70 to make this an interesting experiment on his (and his investors) part – but there’s absolutely no way to adapt this model to anything outside of his unique position. I certainly don’t share his passion that this is a model he can use for upcoming indie films not directed by himself. What it really does, though, is gives a very nice low-budget case study to highlight how difficult it is to make money on theatrical exhibition of feature films.

[Edit – I purposely avoided broaching the issue of the film’s quality. I have no idea, don’t really want to argue about something I haven’t seen, and don’t think it particularly matters to any of the above. I do however stand by my assertion that “Mallrats” was criminally misunderstood]