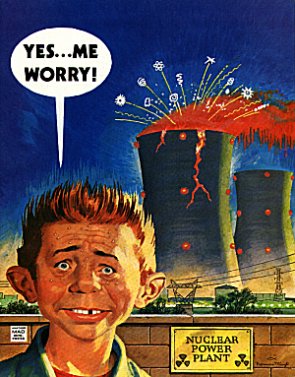 Mad Magazine cutting back to a quarterly publishing schedule? If Don Martin were alive he’d be Ka-PTHLONG-A-DONG-A-DONG-A-DONG’ing in his grave. William Gaines would be incensed, and hungry. Dave Berg would need THREE pipes just to calm down. Sergio AragonÃ©s… well Mr. AragonÃ©s would probably be exactly the same as he is. Because: A. He’s still alive. B. He’s all suave as hell. and C. Because death fears to face the magnificence of his moustache. Hmmm, I kind of lost my track there for a second.

This is, of course, sad news for anyone who grew up indebted to Mad (and more importantly boxes and boxes of back-issues of Mad from parents, relatives, neighbours, and garage sales)… as their first introduction to the world of comedy. Real comedy. Gut-busting comedy, the likes of which Riverdale’s denziens certainly didn’t deliver.

While there’s still some debate about the effectiveness of satire as an educational tool – there really is no question in my mind about the mass of material I only know about thanks to Bill Gaines singular vision.

(An aside – Just to be pedantic about the previous link: Do we really need an extensive study to tell us that people who ONLY get their news from “comedy” news sources, are generally less informed than people who also read newspapers, and watch regular non-comedy news programming? Isn’t that pretty much the definition of “less informed”? I digress)

Without Mad I would have no flipping idea about the Love Canal disaster, Ilie NÄƒstase, Airport (or for that matter pretty much any “disaster” movie from the late 60s / early 70s), or the thrilling world of dichromatic espionage.

Levity (and there was much, much, levity) aside, Mad’s unique historical service served not only as primer for decades of culture (pop and otherwise) but even gave a primer on the historical development of media and culture as well (several times in University I managed to pull of quite nice essay references to the development of film, genre, tropes, and styles based primarily on references to movies I had only ever read parodies of. Heck, I don’t know how many times my parents told me stories about how “going to restaurant” was such a big deal in the 60s… but I guarantee it had less effect that one “Lighter Side of Dining Out”, with a phalanx of servers – hands outstretched for tips.

Obviously the magazine industry has been getting hammered for the better part of the decade, and the current “economic downturn” is being used as a cover for some long-coming cutbacks – but this is a good wakeup call that you can’t assume any media property is untouc-ECCCCH-able.