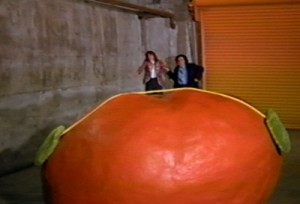 Here are 3 opening lines that would have served the plot markedly better than the line as written :
“You were right, this is a good book, thanks.”
“(sneezes) excuse me. ”
“Pardon me, do you have the time?”

This wasn’t a “good” bad film. This was just embarassing for everyone involed. You could see Mark Wahlberg and Zooey Deschanel actively floundering in almost every scene, overwhelmed by horrific dialogue, characterization that flopped between “trivial” and “nonsensical”, and plot that charted brave new categories to define “overwritten”. They defaulted to looking with vague unease at all times, in all situations, as if the true disaster they were facing was the entirety of the film itself.

The large supporting cast was completely mercurial with characters changing personality radically (sometimes in the middle of a line).

Scenes aren’t even completently staged – with actors clearly struggling to stick to arbitrary marks that have nothing to do with what they clearly want to be doing, and bizarre framing choices just drawing attention to how thin and petty much of the characters backstory is. Throughout the film is peppered with “verite” television, radio, and internet footage not a single frame of which feels legitimate (and the production value of some of it being outright laughable).

A fake climax that was (I assume) supposed to be inspiringly tender, instead reads that (due to the ham-fisted foreshadowing of the actual resolution) the protagonists were either lobotomized off panel, or are collaborating in a bizarre suicide pact in the hopes they can kill an eight year old girl as well.

I can only hope that some of the worst offenses were studio-edits (one particular news report, that pretty much ruins the end of the film with 10 minutues remaining in the movie reeks of a studio re-cut) – but even so I’m at a loss as to how a man who used to have a deft directorial touch, and could turn an unsderstated natural sounding phrase managed to produce such a jumbled amateur mess.

This is a really disapointingly bad movie, particularly because I think there could have been an interesting movie in there somewhere – especially given how well a few sequences are done… but the end result is nigh-unwatchable.