Farewell to Floppies: Part 0 – Adieu to the FLCS.

I re-read this post on digital comics yesterday (based on Brian Hibb’s post on Digital Comics sales), and I noticed something I hadn’t noticed before. For starters how many frustrations I actually had with comics buying compared to pretty much every other recreational aspect of my life. But more importantly, I realized that I have fallen into buying comics in ways that are actively harmful to how I’d like to see the industry as a whole develop.

I’ve argued for years that yearly “tie in” events by the major publishers are actively harmful to the development of strong series and characters that can stand on their own, not to mention attracting casual interest – but how often have I, personally, not purchased a crossover issue because of it? The answer – never, because I know retail stores pre-order my pull lists up to two months in advance, and by the time I find out an issue is a tie-in, I don’t want to stick them with non-returnable product.

Have I ever immediately dumped a series that moved in directions that are juvenile, or exploitative? By the time my bi-weekly shop visit comes up will I remember how mediocre last months titles were? Or will inertia win out until it reaches a point, years later, I don’t even remember why I’m buying a series anymore – it’s been so long since I’ve actually enjoyed an issue? 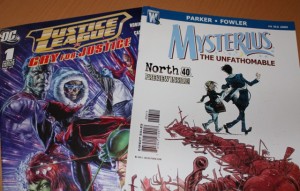 Both these comics came out in Sept 2009. One of these series I automatically supported through a pre-order made months in advance and ignorant of any critical review. The other I managed to (finally) track down in a store in a different city after I had pretty much given up ever reading it. One of them is absolutely terrible.

How often do I remember that a favorite writer or artist is getting a shot on a series I don’t regularly buy and remember to add it in advance? Never.

How often do I protest a writer or artist I enjoy getting what I feel is an undeserved boot from a series (or being meddled to death by editorial fiat)? Never.

And by the same token, how bad have I been at supporting innovative up-and-coming new series or stellar concepts? I’m not a “there every Wednesday” buyer – and my regular haunt is a modest shop with an (understandably) limited selection – and so, again, unless I remember to order something months in advance or I’m willing to start epic city wide back-issue hunts – I often just wait around in the hopes that a trade will eventually come out, (and that I’ll remember the series, or notice when it does).

I look back at the majority of the work I’ve told publishers (through my dollars) I want to support over the past decade and I don’t see the Phonograms, or the Chews, or Roger Legranges Muppet Show runs. I wasn’t buying Roger’s Blue Beetle, or Andrekyo’s Manhunter. And it’s not just the major publishers – I had a lengthy discussion with Jim Zubkavich about his (then-upcoming) Skullkickers at last years TCAF – A project that sounds pretty much like a read tailor made for me specifically (and from a creator I adore)… and I’ve never plunked down the $2.99 to support Jim, or to indicate to “the industry” this is what it should be making – because I never saw it in stores, and I didn’t order it weeks in advance, and by the time I found out it was actually being published the series was already at issue #6!

Meanwhile I own a complete run of “Cry for Justice”.

I love comic book stores, I respect the heck out of comic book retailers – but the realities of physical retail make purchasing a passive rather than active act, and for me – personally – that just enables many of the things I turn around and say I hate about the industry. The crossovers. The “stunt-events”. The “flavor of the week” creative teams, the “of course they’ll keep buying it”. I’m supporting comics I don’t even like, and in some cases haven’t liked in YEARS – and then I have the gall to bitch on the internet about Brightest Day? I have a *long box* full of a complete run of “Silver Sable” comics despite having no interest the character, a remembrance of reading any of them, or even a recollection of why I started buying the series in the first place (probably that shiny, shiny, Chrome #1 cover no doubt). How can I expect the industry to change in a progressive way when I have provided absolutely no economic feedback about the types of works I want to be purchasing?

And worse is that, functionally, there is absolutely no way in the DM to provide economic feedback. If you do immediately drop a title, that doesn’t hit the publishers in the pocket book – it leaves the retailers holding the bag. They’ve already placed their orders. The direct market essentially lets the major publishers use your friendly local shop owner as an economic airbag.

How can I then pretend to be surprised about “the cost of doing Phonogram“? I didn’t buy the floppies, and don’t know anyone who did. And you know what? If I was running my particular FLCS I wouldn’t have ordered any rack copies either given the audience I see in that particular neighbourhood and location. So how is this a model that works at all for how I thinks “comics should be”? Who do I expect to ride in on a white horse and make the system better? What overnight pokemon-like-evolution am I expecting any moment to level up the industry?

If the comics I am currently buying weekly in-store were available on some Comixology-esque application at the same date, and price that Iâ€™m currently paying in-storeâ€¦ I would buy all my monthly titles on-line.

but you know what? I don’t even enjoy a lot of the comics I read every month – and how do I expect anything to change if frustrated buyers like me just keep on doing the exact same things we’ve always done?

All of this in mind, I went to my FLCS and asked them how much lead time they’d need to not be stuck “holding the bag” if I cancelled my pulls – and then I shut it down like Walter Peck. All of them. As of the end of April for the first time since I was 11 I won’t have anything reserved for me at any physical comic store anywhere in the world.

I’ll still hit up my usual haunts I’m sure – I suspect there will always be trades and indie stuff that I’ll want physical copies of (“The Library” has to keep it’s stock current to reach out to the unconverted after all). But I’m drawing a small, personal, line.

Comics publishers of the world – if you want to sell serialized non-collected comic work to me starting May 1st, you better be selling digital, and directly, and you can bet your bottom dollar that every buy is going to be an active, rather than a passive decision.

Honestly, I don’t know what to expect from this experiment, but I figure instead of waiting for everyone else to do the legwork for once, it’s the absolute minimum I can do.