Need to monitor your iPhone tethering on OSX? 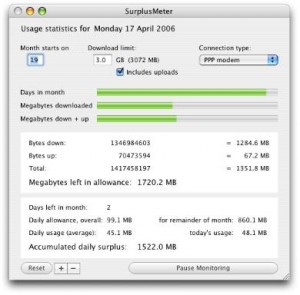 [ Update 07/20/09 – According to the support staff at Skoobysoft, surplusmeter does not monitor tethering traffic… this is surprising since it’s done a fine job for me (I even tested it by downloading some files of known size and comparing the results), but others are having problems with it… see the comments below for more information]

I’ve actually just written a bit of a brain-dump over a coffee break on where my head is at heading into tomorrow’s CRTC hearing – but it won’t pop up until later (I often bank posts to show up “in the future” to spread out my infrequent content. This freaks co-workers out when they think I’m blogging from meetings, airplanes, or 4am). Instead you get one of those rare geek-tastic “tech tip” posts! Batten the hatches.

I wasn’t one of those people who was *incredibly* stoked about iPhone 3.0 tethering. It seemed like it was a nice feature, but I couldn’t think of a lot of times I would use it. Suffice it to say, it is now one of my favourite things in the world. At the airport and don’t want to pay $12 for wi-fi? Tether! Can’t get an Internet signal in your hotel room? Tether! Network goes down at the CBC? Tether! It’s a glorious, glorious, thing.

However I was startled to learn that the iPhones “network useage” monitor does not include tethering data – so you have no idea how hard you are hitting your iPhone data plan… and as we all know… those things don’t come cheap.

Take head OSX users, Skoobysoft’s surplusmeter is for you! This handy little OSX app will graph all network usage on *any* of your ports – and also project your usage for the month. It does the job, it’s unobtrustive, and it’s free (and considerably easier than most other suggestions which involve setting up proxy servers and examining the log files).