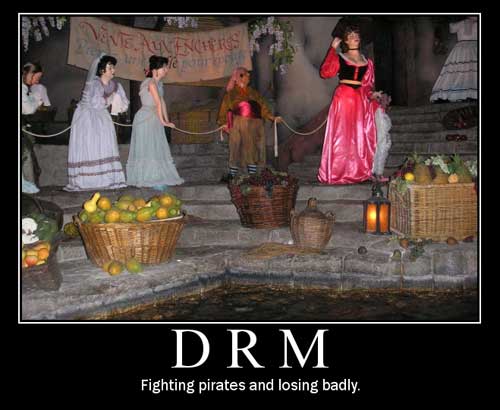 So I get horibly sick for a few days and go and miss the, likely final, MacWorld Keynote. No offence Phil, but it just would have felt wrong without Steve anyway.

Others will cover the keynote and other show highlights better elsewhere – but I just wanted to take a moment to talk about the (nice) announcement of Apple dropping all DRM from iTunes by March 2009.

I was going to write up a little “what’s the deal” faq, but Macworld has done it better than I could and in far more depth.

The only point I have to add to this discussion is that I get a little frustrated when I read coverage that insinuates that Apple was the major roadblock to removing DRM on iTunes, because if anything they are the major reason that DRM-free music exists at all.

Without the hegimony of iTunes, I don’t believe for a second that the fine folks who brought us the RIAA would have jumped onto the DRM-free bandwagon to try and prop up Amazon as a MP3 alternative, nor would they now (two years later) be bringing the same generosity to Apple (in return for Apple finally caving on variable pricing… something the labels have wanted since day one). Apple’s got their faults – but this isn’t one of them.

I decided a couple of months back to stop buying iTunes protected AAC’s because they don’t play on my lovely Squeezebox, not to mention trying to track my “authorized devices” needed some kind of flowchart since I’ve moved through a lovely collection of second-hand ipods, as well as a decade of laptops and desktops. Spending a good chunk of my holiday trying to physically track down CD’s in Arizona – I felt like I was going back in time… seriously, spending a day failing to locate a single physical copy of “In Ghost Colours”felt downright archaic. It was like waiting for a cassette tape to auto-reverse, or winding a gramophone.

What’s this iTunes? A lovely little plus icon? Deftly played.