The Most Important Thing That Will Happen In the World Today… 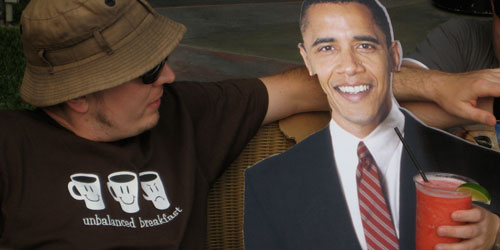 Hey, I won a free small rootbeer in the McDonald’s Monopoly contest!

What were you thinking I was going to write about?

Levity aside, I’m a big political junkie both Canadian and US (the domestic and foreign policies of the guys and gals down south often having as big… if not a bigger… impact on this country than our own body politic). Around last March I was just starting to pay attention to the US primaries and was kind of falling into a bit of a malaise. I was actually a big McCain fan going way back, and the prospect of a McCain / Clinton race seemed like a nominal win-win as either would be better than the current status quo – although if I was really honest with myself, I wasn’t enthralled with either option. Clinton always struck me as a big subscriber to Bill’s “old school” of heavyweight political influence (which probably was borne out over the campaign), and McCain always struck me as “old” (hey, I’m two for two).

Then one night in March, as I was no doubt plugging away on some project or other, I happened to have the TV on CNN as primary results were coming in and managed to catch the speech by the junior senator from Illinois. It was though provoking. It was insightful. It made me challenge some beliefs, long and tightly held, and find them wanting and cynical. It made me realize that I could hope for an outcome to a US election cycle that was not only “less crummy” but “revolutionary”.

And so, tomorrow, as we take the campaign south and west, as we learn that the struggles of the textile workers in Spartanburg are not so different than the plight of the dishwasher in Las Vegas, that the hopes of the little girl who goes to the crumbling school in Dillon are the same as the dreams of the boy who learns on the streets of L.A., we will remember that there is something happening in America, that we are not as divided as our politics suggest, that we are one people, we are one nation.

And, together, we will begin the next great chapter in the American story, with three words that will ring from coast to coast, from sea to shining sea: Yes, we can.

So I hit the books. I read bills the senator had sponsored, books he had written before he had even entered politics, and the platforms he was running for and found very little wanting.

Today the United States has the chance for the first time, in a very long time, to elect a president who could be historic. I am not saying he will be. But he could be that rare combination of intellect, charisma, and strategic thought with the good (or bad) fortune to show up at a key time where one could, conceivably, effect great change across the nation.

Much has been written that this particular candidate is nothing more than a personality cult, a shell that can inspire only with words, not with actions. But is that not the ultimate goal of politics? The founding fathers defined a country with words and inspiration. The fifteenth prime-minister of Canada inspired hope amongst a young, disenfranchised, demographic and changed the very language of the country in the process.

I can not offer any promises that “hope” always pays off – or that idealism won’t often be trumped by the cold light of reality. But I will say this: I would much rather see the man win who has the chance to be extraordinary. And I believe that’s what we have the chance to see tonight.

Thousands of miles away from me, someone else was watching the same New Hampshire primary speech, and was equally motivated to look into what this “Barack Obama” was all about. He wrote a song about it. Some have called it worshipfull, some have called it naive, some have called it calculating. I call it inspiring. It gave me hope that American might just try to be extraordinary.