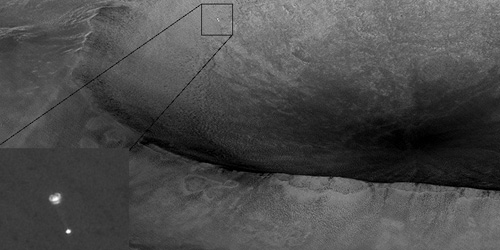 Looks like martian Winter finally caught up with the Phoenix lander. But hey, discovering water ice on Mars, plus another two months of data beyond one’s mission is nothing to sneeze at. Some rake at slashdot suggested we pour some carbon dioxide on the curb in memoriam.

Just as an aside – where is our civilization’s sense of exploratory wonder, at the awesomeness of our technology? We are driving robots around Mars. There robots have arms, and claws, and ovens, and cameras, and microphones. They are powered by the sun. They are on Mars. Heck we can get copies of photos taken on Mars on our phones with very little effort. Jules Verne would shit the proverbial brick. We are truly living in an age of wonders society! Be more appreciative!