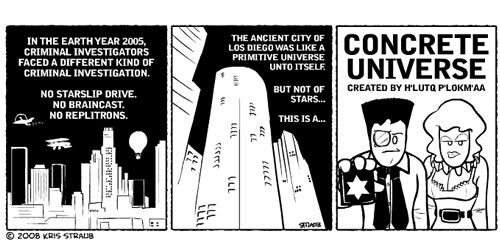 Just a little web-comic pimpage – Kris Straub (who writes something like forty seven thousand and eight different webcomics) has started a story-within-a-story plotline over at Starslip Crisis that I’m completely in love with.

The concept is that in the 34th Century “Concrete Universe” is a popular historical police procedural broadcast show which is set in our present day. However because of the time gap – the future has about as good a grasp of modern day life as we would have of, say, the 5th Century (do the math – it all works out). That is to say, not very well at all.

Now if you’ll excuse me, I have to go defrag my daguerreotype.