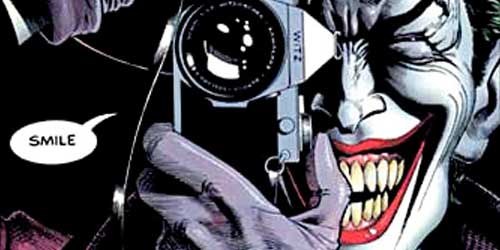 I was picking up my pull list at my local comic haunt last week (confidential to readership: If you don’t know what a “pull list” is, this story is probably not for you) and ended up in line behind a mother and her young son discussing which comic character he would dress up as for “Super Hero Camp.” “Wolverine!” was his instant, choice. “No, that’s too scary for some of the younger kids – pick someone more friendly.” The boy started scanning action figures lining the wall across from the counter “The Hulk! Hellboy! Lobo!” Each met with a similar complaint. The young gentleman clearly screwed down his thinking cap to give the issue some major thought – and then you could see the lightbulb go off over his head – “The Joker!”.
Mom beamed. “That’s a much better choice!” At this point I came dangerously close to doing a spit-take. May I present a common comic-shop dillema: Should I volunteer an opinion that no one has asked me for?

Comic shops are tricky places. I have no qualms butting in at a grocery store if people are clearly having trouble trying to figure out how to choose a ripe melon, or an electronics store if someone is clearly being misled by staff, or at a mall if someone’s lost. The problem with comic stores is that people often have such strong, differing, and incompatable opinions in their approach to this particular media that to offer advice uninvited is often to incite some kind of dogmatic holy war. I once nearly got my head bit off when I heard someone trying to find “Love and Rockets” for a book report and, by pointing them to the right shef, revealed that L&R is a series, not a singular volume.

On top of all this undercurrent, Comic stores have a bad rap for being hostile places to the general public – and having the casual browser deluged with unwanted discussions and arguments every time they visit doesn’t do anything to help that impression. These are the things I think about. But here was a women who clearly had ethical issues with some super-heroes, and clearly didn’t know that The Joker was not a good role model for her child.

An aside:
How does anyone with even a passing relationship with pop-culture over the past four decades not know that the Joker may not be a good role model for their child? I’m pretty sure my Mom would know that and she’s made a concerted effort to avoid anything that could possibly ever be funny-book related (expect Little Lulu reprints – those are awesome). Depending on the incarnation over the decades, he’s either an insane mass-murderer, a calculating sadist, a psychotic criminal, or a giddy homosexual (thankfully, 60s media watchdogs were too occupied with Hippies and “The Batusi” to notice).

Thankfully, everyone in the store was spared from having to figure out a tactful way to broach the issue as the mother noticed the collective double-takes and she proceeded to ask the cashier and I what we knew about the Joker.

The cashier, god love her, managed to assemble the very carefully worded “He’s… a… bad guy… who has killed… a… lot… of people”, which was significantly more appropriate than my first mental draft “For a guy with a lot of fancy poisons and bombs, he sure has beat a lot of teenagers to death by hand with a tire-iron.” We then collectively did our best to provide several different suggestions which would balance “cool factor” with, you know, not being a homicidal maniac. Well, the rest of the store did. I just repeatedly suggested Batman – because honestly, what kid *doesn’t* want to dress up as Batman?

Dang, *I* want to dress up like Batman most days.

The moral of this story is: if you find yourself in a comic store, and don’t know anything about comics, don’t be afraid to ask the staff (or other patrons) questions about things. We like talking about comic stuff. We LOVE arguing with each other about comic stuff. We LIVE for giving recommendations. But most of us try not to butt in unless asked. We also can prevent you from sending your children to camp dressed as a guy who paralyzed a young woman just because he needed some good photos to show her father while he tortured him.

And no, I haven’t seen the movie yet – but am excited enough to allow a one-time exception to my “no opening weekend Hollywood movies ever” rule.