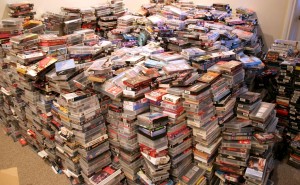 So in part one of this three part series I wrote about how the commercial lifetime of content is shorter than ever before (awesome). Now lets look at the equivalent bummer on the consumer side; How content delivery formats are obsolete faster than ever.

This shouldn’t come as a surprise to anyone. Just look at recent history, the venerable VHS format had nearly a thirty year run before being deposed by the “next best thing” (to say nothing of vinyl records eight decade run as king-of-the-hill for audiophiles). DVD, on the other hand (while still going strong) is less than ten years old as a widespread commercial format. Poor old UMD barely lasted three years (as a movie format, I know it’s still hanging on, sort of, as a software format). Then we look to a myriad of digital codecs and wrappers all of which are constantly evolving. Heck even a set standard like “high definition television” can barely go a few years without changing (from >480i to 720p, to 1080i, to 1080p, to 2k, to 4k…).

All of this is to say that if I ever dug out my old Iomega Zip Drive and got it running (and could find a compatible computer with a SCSI port to connect it to, and an operating system that would recognize it) I’d STILL have a hard time finding a player to handle whatever variety of RealMedia was popular ten years ago.

Consumers have been very well served for years by the provisions in various copyright legislations that allow for making “backups for personal use” (or similar) of works they have legally purchased. While these clauses were initially put in because of the unreliability of new media formats (early tape-based media was really unreliable – they’d snap all the time, so you better make sure you made a dub of your wedding before you sit down to watch your irreplaceable cassette) they instead came to serve as proxies for protecting consumer interest in maintaining the ability to view and transfer legally purchased media.

So what would a truly progressive copyright legislation do to address this?

2. Enshrine the consumers right to transfer their interest in a work they have legally purchased to any format they choose (and are able) to.

This isn’t just semantics. The “Holy Grail” for many (short sighted) content producers is to sell consumers the same product as many times as possible (hey someone bought the Beatles on LP, 8-track, cassette, MD, CD, DVD 5.1, DVD 7.1, and Beatles: Rock Band…) but this is leading us to a very scary tipping point. As I wrote, extensively in relation to bill C-61 limiting private, non-commercial usages of legally-purchased works enhances the power of the distributors and decreases the power of the content producers. This creates a situation that encourages platforms to be more closed, creators to have far less say in how their work is distributed, and the majority of the profit goes to the gatekeepers who control access to audiences, not the actual copyright holder.

Plus this type of ecosystem would encourage the creation of formats, devices, and platforms that are similarly closed and controlled, because – hey – big bucks to be had.

The prime example I usually give to explain this point is that I can, currently, sell a DVD on my website and know that it’s going to be appealing to people with DVD players, computers, iPods, PSP’s, those cool Archos player-things… in short a huge percentage of the potential video-watching market.

If audiences are restricted to only view content on the format that I deliver it to them (DVD players), I now have to negotiate a litany of deals with a number of distributors if I want to reach a similar audience (except each of those gatekeepers will want a significant cut of revenue for the privilege of access to “their” audiences).

As a content producer, I’m profoundly unconformable with the latter scenario. I don’t want to <em>have</em> to do a deal with Microsoft to sell a video to someone with an XBox. I don’t want to have iTunes being the only allowable source of media for iPods. If future platforms close for consumers, they close for creators as well – likely permanently because there’s little interest in platform owners for doing “one-off” deals (talk to any band that’s ever tried to get a <em>single </em> album on iTunes directly – they have to go through aggregators who cut bulk deals – and take an additional profit share).

By the same token this is brutal environment for customers. Why should I buy *anything* when it’s likely the format or platform is going to be obsolete within a few years? When the PlayStation4 comes out, what happens to my “Rock Band” music?

So for truly progressive copyright legislation let’s actually call a spade a spade and put that in the law. No more arguing if ripping a DVD to an iPhone constitutes “making a backup” – go ahead and make sure the consumer right to migrate their data is clear. That may mean allowing circumventing copyright protection, provided that the intent isn’t to infringe. I know producers cringe at that but they’re not seeing the real boogeyman on the other side, which is that every controlled platform is one they can’t easily access. Without this protection “buying” legitimate product becomes, essentially, a longer-term rental – and far less desirable to consumers, creating a chilling effect on all legitimate media sales.

By the same token, allowing users the right to port their content encourages platform and device makers to embrace that portability. What are you going to buy – a future media player to which you can easily import your existing songs and movies, or one where you’ll have to re-buy everything in some weird proprietary format that probably won’t be around a year from now? Open formats also encourage legitimate purchases as an investment in a library that has more than a shelf-life of a few months or years.

This is a win/win for both content creators and content audiences – and ensures that both have can benefit as platforms, formats, and delivery mechanisms continue to evolve at a breakneck pace. Sounds progressive to me.